According to Luisa Gratz, every year had a theme and a slogan. the slogan was on the flier, and the theme was on the bandanas. The two didn’t necessarily coincide. Some of the themes/slogans were, “Protect the 8-Hour Workday” “Labor Produces Wealth,” “Unity Across the Border,” “Workers of the World Unite,” “The Labor Movement Gave Me the Weekend.

In 1990 and 1993, two commemorative program books were printed. The Newspaper Guild printed the 1190 program. Each page was given to a participating union, who in turn, honored the unionist activities of one of their own members.Several events occurred on Labor Day in the L.A. metropolitan area. There was usually a breakfast, the harbor parade with a picnic, and a picnic in the San Fernando Valley. The Harbor parade was hosted and planned by the Harbor Labor Coalition. The emphasis was that this was the worker’s day. Politicians were not allowed to do any electioneering, such as make speeches, pass out literature, etc. When politicians would attend, they often put on an apron and served meals to the parade marchers.

The first parade had 14 unions participate, with about 750 marchers. At its peak in the 1990s, over a 100 unions attended, an/or endorsed the parade. The highest number of attendees was approximately 10,000.The parade would gather at Broad and E streets in Wilmington. Then march north on Avalon to M Street, going west, and finally ending on the grounds of Banning Park. The march would take about an hour, depending on the size and number of retirees (who walked slower). At Banning Park, food was served, and speeches made addressing the state of Labor, from its recent past to the coming future. 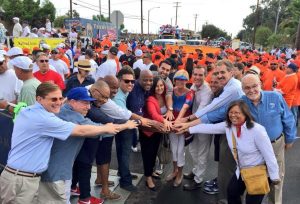 In the beginning, according to Luisa Gratz, hamburgers and hot dogs were served, along with chili, and cold sodas and water. After a few years, in the early 80’s, the hamburgers were dropped as they proved to be a logistical inconvenience.

The County Federation of Labor, AFL-CIO, was invented every year to attend. Though that attendance was very rare until Miguel Contreras came on the scene as the head of the Los Angeles Federation of Labor. Past leaders of the Fed, as it’s called locally, Bill Robertson and Jim Woods, are claimed to have supported the parade. Bill Robertson even spoke at a couple of post-parade rallies, according to Luisa Gratz.

On the other hand, Miguel Contreras aggressively pursued participation with the Harbor Labor Coalition, by proving resources, and busing people to the march.